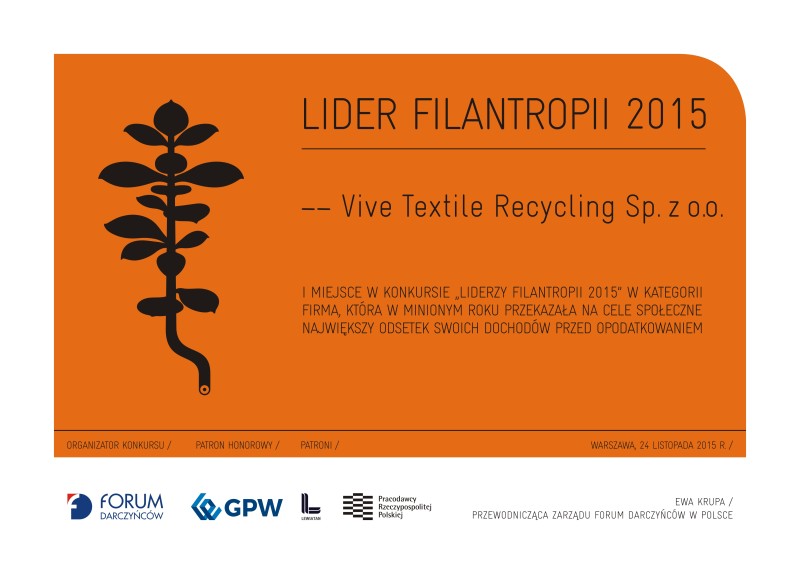 The “Philanthropy Leaders 2015” contest is over!

The winner of the “Philanthropy Leaders 2015” competition in the category of “the company that provided the most funds for social purposes last year” was KGHM Polska Miedź, for the first time in the history of the contest. VIVE Textile Recycling won in the category “the company that has donated the largest percentage of its pre-tax income for social purposes”. Subsequently, PKO Bank Polski and PGE Polska Grupa Energetyczna won second and third place in the category of donations. In the “by percentage” category, the following were included: Atlas Group and Farm Frites Poland. This year’s awards were also given in additional categories. PKN ORLEN received the award for the “Individual Employee Philanthropy Program”. Avon Cosmetics was awarded in the category “Customer Social Involvement Program”. Among the seven newcomers to the competition, the title of “Philanthropy Leader” was awarded to companies: Anwil – in amounts category and Farm Frites Poland – in percentage category.

In 2014, the Philanthropy Leaders 2015 donated a total of PLN 64,507,171 for social purposes. This is more than the amount of PLN 60,000,000 available to the Ministry of Labor and Social Policy in 2014 under the CIF Program (Civic Initiatives Fund, from which initiatives are financed depending on their popularity among the citizens). The results of the percentage category are at a high level: the average share of donations in the company’s income before tax in the top ten of the percentage category is 1.15%.

“Philanthropy Leaders 2015”: In 2014, KGHM Polska Miedź donated PLN 17,000,000 to social purposes, and VIVE Textile Recycling transferred 4.44% of its pre-tax income in 2014 in the form of donations. For many years, both companies have been presenting a responsible approach to social activities, which are characterized by longevity, transparency and efficiency. Both were once again declared the winners of the “Philanthropy Leaders” contest.

Additional “Philanthropy Leaders” contest categories allow us to see positive trends in the area of corporate philanthropy. The vast majority of the companies participating in the Contest have their own corporate foundations (18). In order to ensure its transparency, the majority of contestants publish information on the rules of granting financial support on their websites, provide contact information to persons responsible for philanthropic activities and analyzes their scale and results in annual reports. More and more companies implement programs and projects aimed at solving important social problems in partnership with non-governmental organizations.

Companies encourage the philanthropic activities of their stakeholders: employees through employee contribution programs, as well as customers through socially involved marketing programs, by donating a portion of revenues from the sale of goods and services to social purposes.

– Corporate philanthropy, especially that strategically planned and consistently conducted, is a type of investment that reaps long-term social benefits. Business involvement is not only about funds, but also about the enormous impact of the largest Polish corporate donors. Their donations bring real social change, help build trust in business, develop cooperation and co-responsibility in local communities. More and more companies conduct their philanthropic programs in a long-term, strategic and transparent manner, observing high standards. We want to reward such companies in the “Philanthropy Leaders” contest ,” said Ewa Krupa, Chairman of the Board of the Polish Donors Forum

Orange, which has won the title of the Philanthropy Leader four times, was the Contest Ambassador. The honorary patron of the contest is the Warsaw Stock Exchange, patrons – Konfederacja Lewiatan (Lewiatan Confederation) and   Pracodawcy RP (Employers of the Republic of Poland). PwC is the verifier of the competition. Media patrons: CR Nawigator, kampaniespołeczne.pl, odpowiedzialnybiznes.pl, Odpowiedzialny Biznes – Kompendium CSR i NGO.pl.